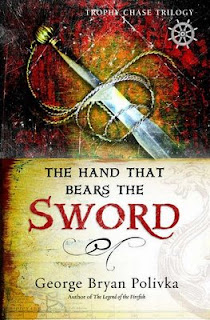 This month we're actually looking at Book One of the Trophy Chase Trilogy, but I came across the newly released Book Two and just had to share my excitement. The Hand That Bears the Sword continues the adventures of high seas, pirates, and a desperate quest to save a homeland from evil.

Christian fantasy at its best has finally arrived in The Hand that Bears the Sword, book two in Emmy award–winning author George Bryan Polivka’s The Trophy Chase Trilogy.
Readers will thrill as newlyweds Packer and Panna Throme are once again thrust into high adventure. Pirate Scat Wilkins returns with evil intentions for Packer as the Trophy Chase sets sail for the deep waters once again. A new and surprising Hezzan in the Kingdom of Drammun has diabolical designs on not just Packer but on the entire Kingdom of Nearing Vast. And, at home, Panna must await Packer’s hopeful return while imprisoned by the lecherous Prince Mather.
Will Packer and Panna escape their separate dangers and find happiness in the Kingdom of Nearing Vast....or will the invading Drammune army steal away their future and that of all the people of Packer and Panna’s homeland? 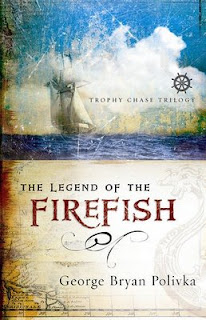 Let's not forget though, the entire trilogy begins with The Legend of the Firefish. Check out the Amazon.com description for this one:

The Legend of the Firefish is a timeless tale of the pursuit of faith and honor.

Packer Throme longs to bring prosperity back to his decaying fishing village by discovering the trade secrets of a notorious pirate who hunts the legendary Firefish and sells the rare meat. Armed with the love of the priest’s daughter and a noble purpose, Packer stows away on the ship Trophy Chase bound for sea. But many tests of his faith and his resolve follow.

Will belief and vision be enough for the young man to survive?
Captivating action, dialogue, and insights into the heroic struggle of faith make this an ideal read for fans of adventure, fantasy, and well–told tales of honor.
Posted by Amy Browning at 1:47 PM

BTW, I love the look of your blog, Amy. Very eye-catching.

I enjoyed the second book almost as much as the first. Some people think it is even better.

Thanks for your participation in the tour!

Eve Nielsen, over at QuestWriter, designed the blog for me. She's wonderful.

Also - I've just received my copy of The Bark of the Bog Owl. I'm very excited to read it.