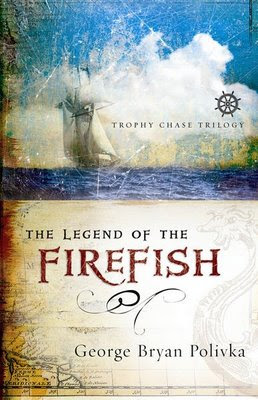 This month for the CSFF Blog Tour, we're looking at a Christian Fantasy book by George Bryan Polivka. The book is called Legend of the Firefish. It's the first of the Trophy Chase Trilogy, published by Harvest House.

Unfortunately, I didn't get a chance to read this one. However, I am going to order it from Amazon when I make my next purchase (which will be very soon). It comes highly recommended from fellow Christian Fantasy authors whose opinions I respect greatly. So that's good enough for me.

Here's what Publisher's Weekly had to say about Legend of the Firefish:

Swashbuckling is the best way to describe Book One of the Trophy Chase Trilogy. Without wasting time, Polivka's first novel drops readers into a fantasy world filled with action, where chivalry is alive and well, and sword fights are frequent. Packer Throme—a failed seminarian turned master swordsman—sets out on a great quest, but not in search of fame. He hopes to honor God by stowing away on (former) pirate Scatter Wilkins's ship Trophy Chase, convincing its captain and crew to seek the legendary firefish—a feat that could raise Packer's fishing village from poverty and win the heart of his longtime love, the beautiful Panna Seline. Happily, Polivka gives this heroine a backbone, not to mention a mighty right hook and her own part to play in this adventure. "It was wrong to have let her, and thousands of young women just like her, believe they had no power, no strength, and therefore could have no place or position," Panna reflects angrily about the plight of women. Though the Packer-Panna romance finds considerable ink, this is a tale almost entirely of pirates, warriors, stormy seas and battles with monsters. The Christian message is palpable, and Polivka's characters relatively complex. With the nonstop action that cuts between multiple story lines, readers will be flipping pages eagerly.

Please check out the updated list of CSFF participants. Peruse their blogs often and even leave a comment or two to let them know you were there.
More tomorrow...
Posted by Amy Browning at 10:46 AM

Hey girl, check out my review. And have you finished reading that chapter of mine yet? :)