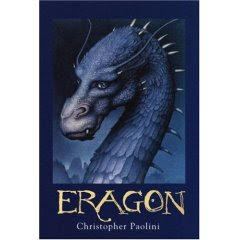 Recommended Age: 15+ (due to violence and gore)

Not a typical dragon story. Eragon, a farm boy, finds a brilliant blue stone, which is actually a dragon egg. When she hatches, Eragon discovers his connection with her runs deeper than the silvery marking that appears on the palm of his hand when he first touches her. Their telepathic communication helps nuture a life-long bond of friendship, love, and a mutual goal: taking down the evil ruler of Alagaesia, King Galbatorix.

What begins as a quest for revenge, carries Eragon and the town's mysterious story-teller, Brom, into a centuries-old struggle for the freedom of the people of Alagaesia. Eragon must choose. Will he fulfill Brom's wishes and become the first Dragon Rider in centuries to lead the rebel group, the Varden, or will he join the king who had put an end to the peace-keeping Riders of old? And who were Eragon's parents? Why was he left to be raised by an uncle and aunt? Will Eragon avenge his uncle's death by the strange creatures known as the Ra'zac? These questions and more plague Eragon as he trains to become a legendary Rider.

The first book in a series of four, Eragon, begins us on a quest of unkown origins and an even more mysterious endings. Along the way, Eragon will meet elves, dwarves, and creatures abound in a magical tale of epic proportions.

But so plagiarized, didn't ya think?

I haven't read this series, though I've heard good things. Have you read the rest of the series yet?

Yes. Each book is better than its predecessor, in my opinion.