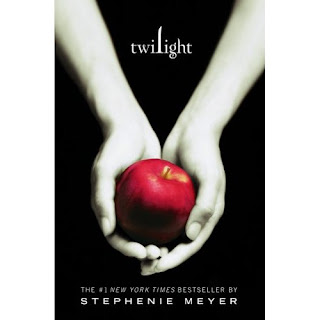 Twilight is not a typical vampire book, or a typical romance. I'm not into either, and I loved this series. The characters are believable, as are their relationships. The whole vampire thing is essential to the plot but not its main focus. The good guys are "vegetarian" vampires - they don't hunt humans. The rest of the vampires do, but the emphasis is more on self-control than about blood-sucking.

Essentially, the story follows Bella, a clumsy, all-too-human character who falls for an amazingly, dazzlingly, decidedly NOT human guy. His family is one of the only groups of vampires that don't hunt humans, and their story is deep and intricately woven into the story. Also, Bella's best friend, other than Edward, turns out to be a member of a tribe of mortal enemies to vampires. This causes a few issues that only their mutual love for Bella can overcome (later in the series).

The cast of characters from Bella's dad to all of Edward's "family" enriches the story and gives way to some elements of humor. The Cullen family all posess qualities to be admired, such as: unparalleled self-control, compassion, restraint, respect, strength, and loving enthusiasm.

In the end, Bella desperately wants Edward to turn her into a vampire, but he refuses. His only goal is to protect Bella and be with her for the rest of her mortal life. She wants to spend eternity with him and he wants her to have a normal life and not to be what he calls a "monster." That whole issue is seen throughout all four books.

In the end, the appeal of Twilight isn't vampires or romance, but tangible relationships that we can all relate to and become enthralled with, right alongside Bella. Stephenie Meyer's writing style is familiar, yet original. The pacing and plot of the books are easy and interesting at the same time. Each book holds its own mysteries and revelations, bringing the reader closer to the moment Bella, and all of us, are dying to reach.

Twilight is the first book of the Twilight Saga, which, in its entirity, and in order, includes: Twilight, New Moon, Eclipse, and Breaking Dawn.

*A spiritual note: There is a debate among characters about the existence of a soul within a vampire and their final destinations, if any. The conclusion to that debate is clearly one of faith. Also, Edward comments that even he can't believe this world was all created by accident (smart guy).

In your profile you mentioned you are an author and volunteer editor. What are some things you've worked on?

Hey J.R. - I'm an unpublished Fantasy author, and I used to edit for a few sections on MuggleNet.com.