Curse of the Spider King 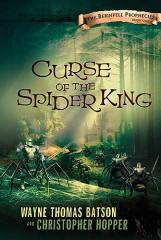 Curse of the Spider King (Book 1 of The Berinfell Prophecies) weaves together a tale of seven Elven Lords, who, as infants, narrowly escaped their doom and are now residing on Earth, completely unaware of whom they are, or any idea of their true heritage.

Seven thirteen-ish “human” children begin to notice dark strangers lurking about, and friendly sources give them each a very special book, The History of Berinfell, a book that comes to life with only a touch. Their first tastes of a history they didn’t even know was their own come rushing out of the ancient handwritten text, seemingly releasing giant Warspiders or setting fire to their classroom.

Each child is an Elven Lord, and thus, is endowed with a mysterious and previously unknown ability that manifests near their thirteenth birthday. As children of Earth, the possibility of such gifts or other existing realms is unheard of. However, The Seven have been sought out and protected by Sentinals from the children’s homeland of Allyra, and are hiding in the shadows. Unfortunately, the Elven Lords are also being hunted by dark forces bent on their destruction.

Curse of the Spider King is what YA Fantasy Fiction is all about. It’s well-paced, richly developed, and irresistibly enthralling. The language is beautiful without getting too caught up in itself. And while we discover more about The Seven, Allyra itself remains mostly a mystery. The scene is set for book two in The Berinfell Prophecies, Venom and Song.

Stay tuned tomorrow for Part One of my interview with co-author Wayne Thomas Batson.  And please check out a few of our other CSFF Blog Tour Participants:

Hi, Amy! CH and I really enjoyed the interview. Thanks for mentioning Venom and Song. I am, at this very moment, pounding the keyboard.

It's due {gulp} Wednesday.

The interview was fun for me too. I never did get CH's back, but I think I'll be posting yours in two parts instead. I know you are both super busy guys though. So - no biggie. :)

Oh, Amy! I'm so sorry! You're one person I DO NOT ever want to disappoint! I must have missed the email. My deepest apologies. Thanks for all you do, girl. Love to you and your tribe. OH! And be sure to keep an eye out on your mailbox this week! ch:

Great post, Amy and these authors sound so fun!

Can't wait for your subsequent posts! :0)

Thanks SO much Christopher! I really appreciate your speedy response. I LOVE that you two did the interview with me. Too much fun!