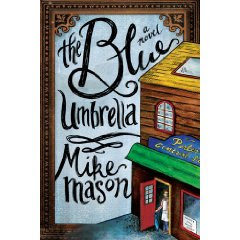 B&B Media Group (The lovely people who made this review possible.)


Not all magic has to be kept from the rest of the world. Sometimes it can be simple and wonderful, just like this book, The Blue Umbrella by Mike Mason. Filled with themes of loss, trust, love, patience, endurance, and possibility, The Blue Umbrella whisks readers away into the world of ten-year-old Zac Sparks. He has lost his mother to a lightning strike, never knew his father, and is taken to a small town to live with his “Aunties,” as nothing more than a servant. But there is something strange going on in the town of Five Corners. Everyone in the town fearfully respects the “Aunties” and worse, they give in to their every whim.


Then there’s Porter’s Store, and the strange events that haunt its rooftop at night. Zac sees the owner, Sky Porter, every morning in front of the store as though he’s greeting each new day. Known to the household and neighbors as “Boy,” Zac becomes ever more frustrated as the grip the Aunties have on him tightens. He realizes he’s a prisoner and that there are more secrets around Five Corners than he could have ever imagined.


One of my favorite aspects of this book is its demonstration of the real-life principle that shows how our mistakes, no matter how horrible, can sometimes harbor extraordinary results. Zac’s journey touches the lives of so many in Five Corners that we get to see several relationships begin and flourish, but a betrayal could ruin them all.


My only complaint: It has a bit of a slow progression at first, but like most firsts in a series, it needed to establish the basics. The last third of it was pure joy. The Blue Umbrella will speak to all ages and carry themes that will enrapture its readers and fill them with hope. And with at least two more books in the series to come, we’ll all be enjoying the adventures of Zac Sparks and his family and friends for quite a while.

Hey Amy! Love the review. I checked the website out and read the excerpt. It's beautifully written - the words, the names, the descriptions. I think I'll put this on my list for when I finish my 1st draft (I'm nearly there).

Oddly enough, the author also wrote a book of short stories "The Furniture of Heaven", and my grandfather always used to say that thunder was the sound of God dragging his chair. Anyway, take care!

The language in this book is very comfortable, but eloquent. It's a very sincere story.

That is so funny about the chair in Heaven similarity. Well - I can't say I believe in coincidence. :)

I admire Mike Mason's imagination for this book. It was fun to read it at times...some parts were quite boring for me!

The cover is amazing...I love it. I get a good feeling every time I look at it. :)

Then there's the eclectic mix of characters. I liked Sky Porter and Chelsea though I found it predictable when Chelsea finally spoke. Well, I guess she had to speak one way or another.

Here is my review of this book. Thanks!